There could be some light at the end of the tunnel for the struggling healthcare construction sector, with predictions that the market will pick up as a result of the increased spending on services announced by the Prime Minister last year.

The outlook for the construction sector overall remains ‘fairly subdued’, according to the latest market report from Barbour ABI.

And, in particular, it highlights the weakness of new orders within the healthcare market.

However, it predicts that increased spending on health service provision by the current government is likely to begin to bring some uplift to output levels into the medium-term.

While the commitment to further government funding for the health service remains on the table; it is unlikely this will provide significant uplift in construction output in the short-term at least

The latest report, giving figures for May, values all construction awards across all sectors at £5billion, based on a three-month rolling average.

The residential sector remains the largest in terms of activity.

Medical and healthcare contract awards accounted for just 1.7% of total construction output for May. 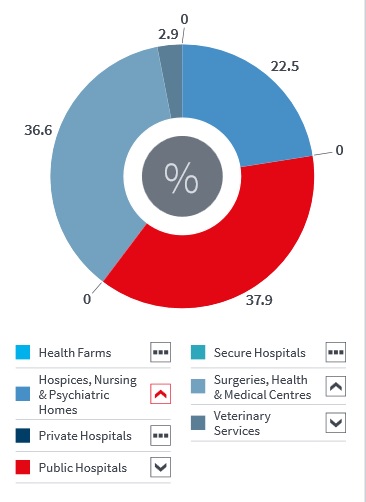 This puts the sector at the bottom of the league table in terms of construction contract awards, both in terms of value and number of contracts.

In May, the East of England was the region with the largest proportion of medical and health contract awards, with a 27.8% share.

The largest contract was the estimated £9.2m redevelopment of Hinton Grange Nursing Home in Cambridge.

The project will see McGoff Construction redevelop an existing building to provide a 68-bedroom care home with dining room, offices, café, cinema and hairdresser along with associated parking and landscaping works.

The second-largest contract award in the region in May was the was £5.4m deal for the provision of a new two-storey entrance block at Colchester General Hospital.

The contract was awarded to Seddon Construction Limited with Brooks & Wood Limited named as foundations and groundworks subcontractors; and Catfoss Group named as frame subcontractor. 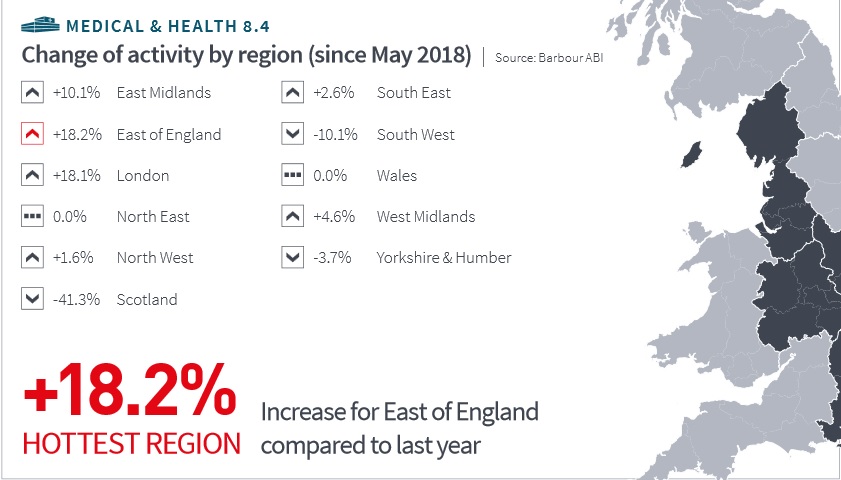 Only slightly behind was the surgeries, health and medical services sector, with a 36.6% share, which is 9.5% higher than in May 2018.

The only other sector with any significant share this month was hospices, nursing and psychiatric homes, with a 22.5% share, which compares to just a 12.9% share in May 2018.

The report states: “While the commitment to further government funding for the health service remains on the table; it is unlikely this will provide significant uplift in construction output in the short-term at least; but it is likely to begin to bring some uplift to output levels into the medium-term.”