Staff show off their talents

TALENTED NHS staff from Cheshire showed off their artistic flair during an exhibition of work at the Waters Green Medical Centre in Macclesfield recently. Organised in support of this years Barnaby Festival, the free exhibition included drawings, paintings, prints, artefacts, photographs and ceramics made by local NHS employees. Val Aherne, deputy chief executive of East Cheshire NHS Trust and director of strategic projects, said: 'There is evidence to suggest that pleasant surroundings can influence the way people feel and bring benefits to a healthcare environment. The feedback from patients, visitors and staff has been extremely positive and we look forward to working with local groups in the future."

PATIENTS and visitors to Basildon University Hospital will be able to admire locally-produced pieces of artwork while they wait for their prescriptions, thanks to the presentation of a number of paintings from The Billericay Studio Group. Spokeswoman Beryl Meadows said of the donation: "We hope local people will enjoy looking at the various watercolour and oil paintings which are hanging in the community art area along the corridor near the pharmacy department." Neville Brown, public governor for Basildon and Thurrock University Hospitals NHS Foundation Trust, added: "We've already improved the appearance of the hospital corridors with some bought-in artwork, and wanted to enhance these displays by giving local art groups the chance to show some of their work. We hope it adds local interest and enjoyment to those who pass through this area." 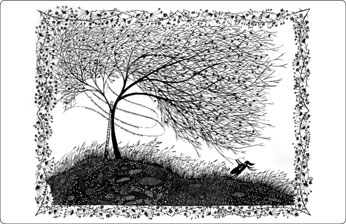 HOSPITAL Arts, part of Chelsea and Westminster Health Charity, has unveiled an exhibition of prints by Rob Ryan at the Rhys Williams Gallery at Chelsea and Westminster Hospital. The works tells stories of love and beauty, with heartfelt messages woven into every scene. Katherine Mellor, arts director for Hospital Arts, said: "We are extremely grateful to Rob and TAG Fine Arts for allowing the Rhys Williams Gallery to show these beautiful prints. Hospital Arts is committed to showing imaginative work of a high caliber and we hope that patients, staff and visitors to Chelsea and Westminster Hospital will take the opportunity to visit the gallery." The exhibition will run until 30 September.

A bright future for Warwick hospital 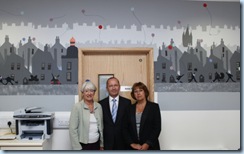 TWO volunteers helped to brighten up the wards at Warwick Hospital recently. Artist Sue Howells, who was awarded the UK's Best Selling Living Artist gong in 2008/9, and Valerie Rooke donated their time and money to spruce up the Aylesford Unit. As part of their efforts, Howells spent several weekends painting a large mural behind the main reception at the entrance. She also donated other pieces for the main corridor. The artwork was chosen to fit with the overall theme of the unit, with the mural depicting a skyline with coloured balloons floating in the air. Rooke donated further funds to purchase additional pieces in the future. Howells said "Valerie approached me to paint a mural for the unit as a thank you for the care the hospital gave to a family member. I decided to design and paint something that was a focal point for patients before they received care, using the original theme of the unit and by incorporating my own style. Both myself and Valerie thought it was an excellent way to give something memorable back to patients and staff in the unit."

ARTISTS looking for a chance to shine are being invited to submit works for the new Tunbridge Wells Hospital. In October, shortly after the opening of the new facility, Maidstone and Tunbridge Wells NHS Trust is holding the Native Flair Exhibition and wants to get local artists involved. Arts co-ordinator, Sarah Taylor, said "The new hospital looks great, but art always improves any public space. There's good evidence that art in hospitals has a positive effect on the clinical environment and can benefit patients in many ways." Commenting on the exhibition, she added: "The hospital will be proud to exhibit the diverse talent of artists in its catchment area, with the images spread through the hospital both inside and outside to ensure all visitors staff and patients get the chance to see the work." Flat 2D images such as paintings and photographs are subject to a size limit of 1m by 1m and people wanting to display 3D art such as sculpture or performance art are invited to contact Taylor direct. 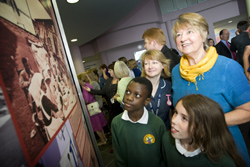 SCHOOLCHILDREN helped out with a ceremony at the Nuffield Orthopaedic Centre (NOC) in Oxford as it unveiled a mural charting its colourful and remarkable history. Children from Windmill Primary School in Headington have been involved in a project for the past two years and saw the fruits of their efforts when the heritage mural was unveiled to patients, visitors and staff. The artwork was paid for by a Heritage Lottery Fund grant and has taken pride of place in the main atrium. The centerpiece of the design charts the history of the hospital from its origins as the Wingfield Convalescent Home in 1871 up to the current state-of-the-art building which was opened in 2007.

THE hottest ticket this August is for the Artrockers Club Night - a variety night fund-raiser for the Norfolk and Norwich University Hospitals NHS Foundation Trust (NNUH) Hospital Arts Project. Artrockers hits the Norwich Arts Centre on 5 August, bringing rock classics, mellow acoustics, cabaret and much more from a line-up of musicians who work in the health service, a host of performers from the Spooky Kid Productions Label and the band Dying Breeds. The hospital's arts co-ordinator, Emma Jarvis, said the event was promising to be a sellout and that all money raised would go towards future arts projects at the hospital. 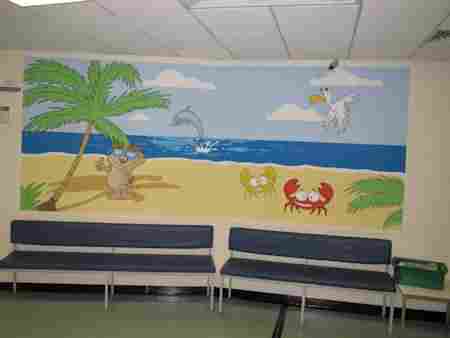 A DREARY wall inside the children's A and E waiting area at Colchester General Hospital has been transformed, thanks to the efforts of a local artist. Ross Baines of Brushworks spent two days hand painting a 5.5mx1.9m mural free of charge. The cheery seaside scene has been designed to appeal to young children, showing a beach with palm trees, crabs, a seagull, dolphin and a dog. Sister Amy Dearsley said: "We're really pleased with the result and can't believe the difference it has made. It had previously been just a plain wall with a few stickers, but the mural has transformed the waiting area into a truly child-friendly environment. It's important that our younger patients can wait for assessment or treatment in an area they can feel as relaxed as possible in, and Ross's mural definitely does the trick."