Hospitals across England have been urged to review their fire safety measures after a report into a blaze on the Ipswich Hospital site highlighted an ‘apparent mismanagement and lack of governance’ among health trusts.

Deputy NHS chief executive, David Flory, spoke out after the results of an investigation into the fire at the Woodlands Unit in Ipswich in 2011. So serious were the findings, that the Suffolk Fire and Rescue Service gathered enough evidence to support prosecution of the Suffolk Mental Health Partnership Trust, which ran the unit, for a range of offences.

However, due to the subsequent merger of the trust with the Norfolk and Waveney Mental Health Trust, the body no longer exists and a loophole in the law means the newly-established Norfolk and Suffolk NHS Foundation Trust cannot be held criminally responsible.

But the incident, during which firefighters had to force their way through locked fire doors to reach a young patient who was overcome by smoke, has prompted a warning from the Government.

Flory said: “The report identified a catalogue of failings giving rise to the mismanagement of fire safety across the organisation. There are lessons for the NHS to learn from the publication of the report as many of the areas of concern appear to be issues that are easily resolved.”

But this was not an isolated incident. In November last year the London Fire Brigade served an enforcement notice on another trust for similar failings, and an inspection by Hereford and Worcester Fire and Rescue Service revealed problems, which meant that if a fire broke out at Hereford County Hospital, there was a danger of it spreading. It too served an enforcement notice and temporary control measures were put in place.

A spokesman at the hospital said the problems were uncovered during building work on the site and that improvements had been made.

But Flory said: “This level of apparent mismanagement and lack of governance of fire safety issues gives rise to overall concerns about patient safety. Therefore, NHS trusts and NHS foundation trust chief executives and trust boards are reminded of their duties under current fire safety legislation – The Regulatory Reform (Fire Safety) Order 2005 . Consequently I would advise that immediate steps should be taken to review fire safety across your organisation to ensure those duties are being met and that patient safety is not being compromised.”

He added that the Department of Health had also taken action to close the loophole which meant the prosecution of the former Suffolk trust could not go ahead.

“Between the fire and the conclusion of the report, the trust had merged with another, and criminal liability had not transferred to the new merged organisation,” he said. “This resulted in the fire and rescue service being unable to undertake the prosecution.

If you have good fire defences within a building compartmentation means that if a fire breaks out in one area, then if patients are moved away from this particular zone and the doors are closed, they should be relatively safe for up to an hour or until fire crews get there

“Having had this brought to the attention of the Department of Health, steps have now been taken to ensure this situation cannot arise with any future mergers or acquisitions. It should be noted that while it was fire safety matters that brought this issue to light, it could in fact relate to any other health and safety type incident.”

The report by the Suffolk Fire and Rescue Service states that a fire alarm sounded at 3.20pm on October 26, 2011, indicating a blaze in a patient’s bedroom. CCTV footage and fire alarm logs examined by the fire crew during their investigation show that on eight occasions a member of staff either silenced or reset the alarm. For more than five minutes after the initial alarm sounded there was no attempt to investigate the cause of the warning.

When staff did go to the room, the patient was unresponsive and could not be located through the thick smoke. The patient was left in the room until firefighters rescue him at 3.45pm, 25 minutes after the fire was first detected.

Failings uncovered by the investigation included inadequate fire safety training for staff, a lack of regular safety drills, and failure to properly address a previously-issued Notice of Deficiencies . 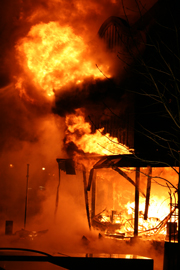 A spokeman for Norfolk and Suffolk NHS Foundation Trust said that since the fire it had been working with the fire and rescue service and had implemented a change of culture and management, with a raft of fire safety changes introduced, including electronic lighters in the courtyard so there is less need for patients to carry lighters and matches. The trust has also reviewed fire systems, doors and security.

According to building fire safety experts, hospitals need to ensure they have systems in place to regularly check all fire defences. This can be particularly complex in PFI developments, for example, where several agencies may be responsible for different parts of the building and its operations.

Speaking to BBH following Flory’s warning, Bob Parkin of Marsden Fire Safety said an important consideration for hospitals was compartmentation; that is the way a facility is built to contain any fire in a particular area without it spreading elsewhere.

He said: “Hospitals are built around a progressive horizontal evacuation system. The principle is that that you don’t want to have to take people outside should a fire break out, but instead move them progressively sideways away from the fire. This is particularly important in cases of hospitals as often patients are not mobile and you don’t want all your patients outside in the elements in the middle of winter. Ultimately, fire safety means that you have got to be capable of getting everyone out if needed, but in theory you do not want to do that.

“If you have good fire defences within a building then this compartmentation means that if a fire breaks out in one area, then if patients are moved away from this particular zone and the doors are closed, they should be relatively safe for up to an hour or until fire crews get there.”

However, even if hospitals are built to this standard, maintenance over the years can breach these safeguards.

Things often appear to be normal from what you can see, but weaknesses become apparent when there is an actual fire. It’s not what you can see you need to worry the most about, but the things that you can’t

Parkin said: “We recently saw a fire in a hospital laundry that had occurred in a fairly new building and had breached three fire doors.

“Things often appear to be normal from what you can see, but weaknesses become apparent when there is an actual fire. It’s not what you can see you need to worry the most about, but the things that you can’t.

“Hospitals are often quite warm places and fire doors can expand and contract, leaving warps through which smoke and fire can travel. Checks on fire doors are often ignored, but they are a critical part of any fire defence and training people to recognise this is very important.”

Another pressure point is suspended ceilings. Often after these are installed, wiring and other works are carried out that can potentially compromise fire defences.

Fires in hospitals may be particularly worrying, not only from flames and heat generated, but also smoke which can travel long distances inside buildings aided by air conditioning systems

Parkin explains: “When you are building a facility, you can have a lot of different contractors in a single building and it is vitally important that they work together. The biggest worry is that a suspended ceiling is put in and then an IT engineer comes along and drills through walls or feeds cables above the suspended ceiling and suddenly that compartmentation that is so important in the event of a fire is unsound. It becomes like a honeycomb and if a fire starts you are going to come unstuck.”

These problems were highlighted during a fire at Northwick Park Hospital in north west London in February 2009. The blaze first broke out in an electrical plant room situated underneath one wing of the main ward block. As fire alarms began to sound smoke was already escaping over the fire doors and funnelling up the side of the 10-storey building. Smoke also spread through vertical space ducts and across landings into parts of two other wings.

A report into this fire, and blazes at four other English hospitals in 2008 and 2009, was later published by NHS London1. It found additional problems with evacuation techniques, which staff were poorly trained in. In some cases fire escapes and doors were also blocked with equipment.

For the benefit of future management of the premises, the design decisions in relation to new buildings or building alterations should be adequately documented as part of the fire strategy

It stated: “Fires in hospitals may be particularly worrying, not only from flames and heat generated, but also smoke which can travel long distances inside buildings aided by air conditioning systems. The need to understand the hazards and risks under these circumstances requires understanding by hospital staff and planners.

“This study has demonstrated the complex nature of hospital evacuation and the need for comprehensive planning. However, it is crucially important that training of all staff accompanies the development of such plans.

“Another essential aspect is to understand why evacuations happen so that the need for subsequent evacuations can be minimised. This will be important when ensuring that hospitals and facilities built in the future take into account structural systems for evacuation.”

In terms of regulatory guidance, the issue is dealt with under Health Technical Memorandum 05-01: Managing healthcare fire safety2 , which states that all chief executives are required to clearly define fire and safety policies for all premises under their control. It says policies should include a programme for dealing with fire prevention, fire fighting and the movement or evacuation of patients and other building occupants in the event of an emergency.

It recommends using specialist fire engineers, particularly where a breach has been uncovered.

“A fire engineer should be able to demonstrate an understanding of the nature and characteristics of fire, the mechanisms of fire spread and the control of fire and the associated products of combustion as well as an understanding of how fire originates and spreads within and outside of buildings and how it can be detected, controlled and/or extinguished,” it states.

When a fire starts we do not have time to start learning things, but we have to immediately be able to put into practise what we have been trained to do

Touching on the issue of multiple organisations being responsible for different parts of the building, it adds: “Each should be responsible for managing fire safety within their own area, but there must be formal arrangements in place to share information about the risks, emergency procedures, staff training and individual organisational responsibilities. Each must co-operate fully with the other to ensure fire safety measures are not compromised.

Checks on fire doors are often ignored, but they are a critical part of any fire defence and training people to recognise this is very important

“For the benefit of future management of the premises, the design decisions in relation to new buildings or building alterations should be adequately documented as part of the fire strategy.”

It also puts emphasis on training and training updates both for managers and staff.

Parkin said: “Training is vital, both in terms of maintaining fire defences and dealing with fires when they occur, and this training must be ongoing. When a fire starts we do not have time to start learning things, but we have to immediately be able to put into practise what we have been trained to do.”