When LED illuminaires first became more popular and more widely available, they were known for taking several minutes to light up to full capacity and, when they did, were criticised for being pale and ineffective, particularly in important clinical environments where good lighting is crucial.

Fast forward a decade and the situation is very different, with LED lighting now seen as the best way to enhance medical environments – at the same time as cutting costs and reducing maintenance and energy bills. 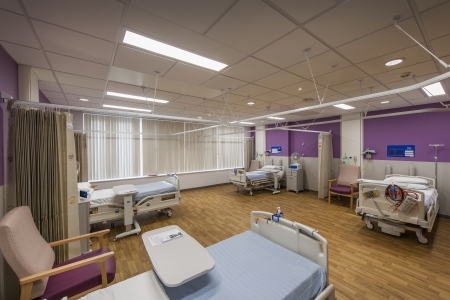 “They offer very good quality of light and can be tuned to the correct colour renditions for different applications, for example softer light during visiting times or late in the evening, but a stronger, clearer light when a clinician is making a bedside visit.”

Not only are modern solutions tuneable in this way, but they have enabled the introduction of human-centric lighting options – which can be tailored to individual patients in order to enhance their wellbeing or to help staff carry out their tasks more effectively.

Certain wavelengths in light influence psychological processes, such as the ability to concentrate and perform, the hormone-controlled waking-sleep rhythm, and general wellbeing

“Lighting is not just for visual orientation,” said a spokesman for manufacturer, Trilux Lighting.

“Certain wavelengths in light influence psychological processes, such as the ability to concentrate and perform, the hormone-controlled waking-sleep rhythm, and general wellbeing.”

Another benefit of LED lighting solutions is that they can increase lumen/watt values by as much as 100 compared to traditional products.

Bourne said: “LED technology has moved on a long way since the early solutions. Now the complete opposite is true and the ability to cope with multiple switching, ease of control, and dimming capability are all real benefits of using the latest LED luminaires.

“The smaller size of these units is also enabling designers to create more aesthetic but still highly-functional solutions.”

Matt Caygill, UK and Nordic region business development manager at Tridonic, added: “The introduction of LEDs has given lighting manufacturers capabilities to vastly improve hospital lighting conditions. On top of this, it also has unlimited switching and is better for emergency lighting durability.

“Being able to switch on instantaneously, and dim to 1%, makes LEDs a lot more attractive when compared to conventional light sources of the past.”

As well as enhancing overall lighting levels, LEDs are the product of choice to drastically reduce carbon emissions and energy bills in line with tough government targets.

Simon Taylor of Aura Light UK said: “Lighting consumes approximately 20% of all electricity in the world, so it stands to reason that energy efficiency has become the hot topic.

“Because of the advances that have been made in lighting technology, there are now products with up to four times the life of a standard lamp and which can help to save up to 80% in electricity.”

Being able to switch on instantaneously, and dim to 1%, makes LEDs a lot more attractive when compared to conventional light sources of the past

Examples of hospitals that have benefited from LED lighting deployments include Addenbrooke’s, where a recent upgrade led by SaveMoneyCutCarbon is helping to save £15,000 a year in energy costs.

Due to the quick return on investment, typically just one-and-a-half to three years, the project received Salix funding, covering the cost of the installation based on the expected reduction in carbon usage. This is making LEDs even more attractive to cash-strapped healthcare operators, particularly those looking for retrofit solutions.

The LED replacement programme has reduced the hospital’s carbon footprint by 53%. Bupa also introduced LEDs to its Netherton Green Residential and Nursing Home in Dudley as part of a £28.3m investment in energy-saving technology. As a result, the site has reduced its electrical usage by 20%.

In addition, most manufacturers now offer dimmer and sensor technology, which further reduces energy use by turning off lights when areas are not in use; and other controls that can increase the energy-saving possibilities dramatically.

And the fittings area easier to clean, aiding infection control measures as there are fewer edges and gaps in which bacteria, dirt and dust can accumulate.

A spokeswoman for Schneider Electric said: “The LED market has seen rapid growth in recent years, largely thanks to the increased focus on sustainability and energy efficiency.

“LED lighting technology has advanced considerably since its introduction in the early 1990s and the rewards in terms of the amount of energy and money saved can now be significant.”

Offering advice to healthcare facilities managers on specifying and fitting LED luminaires, Bourne said: “Be really sure about the specification and absolutely clear on your requirements, then check and check again that the products really do meet those requirements.

“It is worth paying a premium for a product that really can deliver the best colour rendition and which is backed by a five-year guarantee. It won't save you money in the long-run if units fail and unexpected maintenance and replacement costs are incurred.”

Caygill added: “Make sure you get a five-year, 50,000-hour guarantee from your supplier. Aa lot of companies offer 50,000 hours, but only for one year, or some have conditions to their warranties.

“Also look at getting component systems - driver, LED and emergency lighting - from one supplier to cut costs.”

And a spokesman for Steritouch, said: “It’s crucial to understand specifications. The difference between installing and living with inferior LED products can be night and day!”

To read more about the Addenbrooke's lighting scheme, click here. 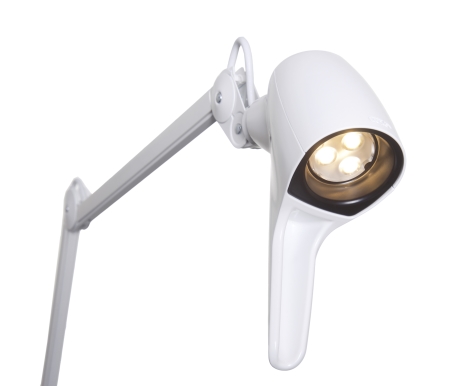