THE new Maggie’s building in Swansea looks almost as if it is twirling its skirts; the way the structure swings out from the middle in lively curves. A still core lies at the centre, ensuring an overarching feeling of balance for the newest Maggie’s cancer caring centre.

“The building extends an open invitation for people to come and rebalance themselves,” says Wendy James, partner at architects, Garbers & James.

People going through cancer, and their families, are often stuck in a maelstrom of information, emotions and issues

“People going through cancer, and their families, are often stuck in a maelstrom of information, emotions and issues. So, with this building slightly set aside from the rest of the hospital, it’s important to provide this calm centre. The central egg-shaped drum is a welcoming area, representing a calm centre in the dynamic form.”

The south west Wales facility is the 10th Maggie’s centre to open in the UK. The charity aims to provide a place of comfort for anyone living with cancer, having treated almost 78,000 people last year. This is the legacy of the late Maggie Keswick Jencks, whose experience of going through cancer inspired a vision of welcoming buildings where people could feel at home during their recovery. The design of the Swansea centre is the work of Japanese architect, Kisho Kurokawa of Kisho Kurokawa Associates, but following his death it fell to Garbers & James to complete the work.

“My partner Thore Garbers met with the client and Kurokawa before his death, and as he lived so far away he’d invited us to participate in the design as executive architects,” says James. “Kurokawa died early in the process, which came as a shock. We went to Japan where we visited some of his buildings and his office with family and colleagues, and we took note of details he had used. We had inherited a fully-descriptive outline sketch scheme, but the geometry hadn’t been defined. It was thrilling to find and establish this dynamic form.”

Kurokawa, who was a friend of Maggie Keswick Jencks, wanted the building to incorporate both Eastern and Western elements. He said: “The new Maggie’s centre will come out of the earth and swing around with two arms like a rotating galaxy. One side will welcome the visitor and lead to the other side, which embraces nature, the trees, rocks and water.”

The architects at Garbers & James wanted to remain true to this vision, but also needed to consider how to translate this into a practical building. James explains: “We worked alongside the engineers and the contractor, Sir Robert McAlpine, to find people capable of doing this challenging work. The building is almost hand-crafted, yet simultaneously relies on latest technologies. Sometimes it has appeared almost medieval during the process, particularly in the construction of the cut carpentry roof. It has taken state-of-the-art technologies to produce the concrete steel and titanium elements, yet the workers on site have included carpenters and masons, pulling together contemporary design through entirely traditional crafts.”

What is very important about a Maggie’s centre is that you should feel invited, and able to come inside and make a cup of tea or sit by the fire. The message is that people using the centre thoroughly deserve to be given this space

As the building is nearing completion, the delicate touch of this home-away-from-home is coming into its own. The architects are hoping the design will help inspire people living with cancer to see there are still aspects of vitality in their lives, having used light to create a dynamic feel. Instead of adding large panes of glass, an array of small windows has been used to frame deliberate views in a variety of directions.

“The building becomes a sort of complex lens, filtering the light,” says James. “It’s like a sundial: the light flows through it at all times of the day, particularly through an oculus above the central drum.“

The centre is part of the Singleton Hospital campus in Swansea, but the building has deliberately been designed as a separate unit. Sitting on top of a wooded slope, the view to the north is of mature estate land, while to the south there are views of Swansea Bay. The gardens, designed by Kim Wilkie, also reflect the centre’s theme of activity versus calm: 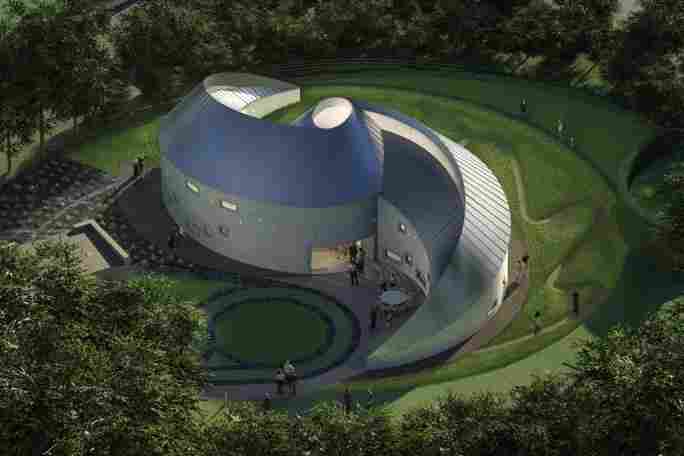 “The entrance side has an active garden with vegetables and herbs, which people can help tend if they so wish. On the other side of the building there is a contemplative long grass meadow, which feels a bit like water,” says James. “Kurokawa thought of how the building would sit in the landscape, pulling together elements from the woods, and from a sense of the water, speaking of its meditative qualities.”

Most of the funding for the Maggie’s centres comes from charitable donations, however the Welsh Assembly Government also contributed to the Swansea centre. In total, 900,000 people live within the area covered by the South West Wales Cancer Network, and any cancer sufferer can visit the Maggie’s without charge or an appointment. The Swansea centre will also be the first to work with the local medical genetics service, reaching out to people whose family history puts them at risk of cancer.

While the design of every Maggie’s centre is different, what they have in common is an unwavering focus on maintaining quality of life through a traumatic experience.

“What is very important about a Maggie’s centre is that you should feel invited, and able to come inside and make a cup of tea or sit by the fire,” says James. “The message is that people using the centre thoroughly deserve to be given this space.”

The site will be the third Maggie’s centre to open this autumn. Next month will see the opening of a centre at Nottingham City Hospital, while earlier this month a facility was unveiled at Gartnavel Hospital in Glasgow.

Maggie’s Nottingham has been designed by Piers Gough, founding partner at CZWG Architects and a personal friend of Maggie Keswick Jencks’s.

“The idea was to make a refuge, something slightly hidden away, nestling into the trees and away from the hospital. The building is almost perverse in its symmetry,” said Gough, who has created an elevated oval building. “It seemed intriguing to do a building that wasn’t free-form; the landscape around it is quite loose and free, so the building could become symmetrical. The concept is that the elevations are all ovals and they interlock like a Canadian log house.” 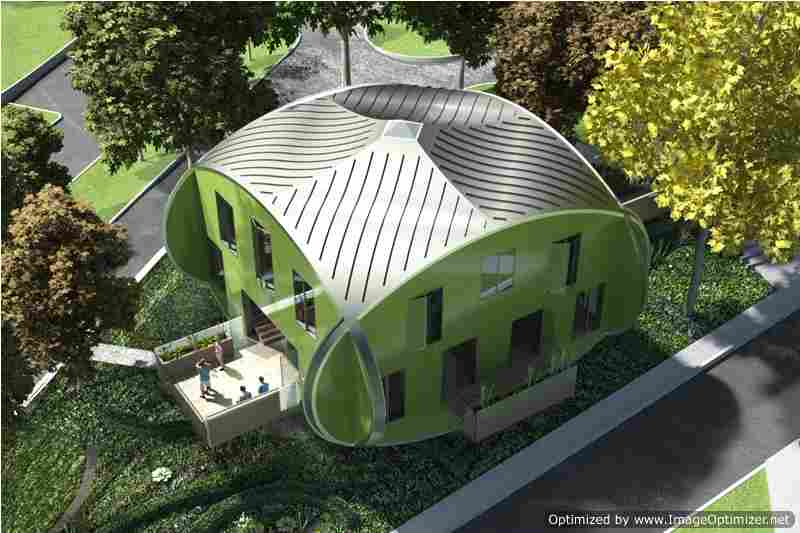 The Nottingham centre will serve the Mid Trent Cancer Network, which covers an area of 1.3 million people. Visitors will arrive at the centre via a bridge across the tree-covered sloped ground, and the building remains joined with the garden via balconies extending from most of the rooms. Designer Paul Smith has also been part of the project, creating the centre’s interior using photos taking during his travels around the world.

The centre at Glasgow’s Gartnavel Hospital is the work of Dutch architect, Rem Koolhaas, partner at OMA, who worked alongside Ellen van Loon.

“I enjoyed designing such an exceptional environment with this very dedicated and inspired team of designers and contractors. The sequence of spaces is an interplay of openness, retreat and support to underpin the Maggie’s programme,” said van Loon.

The garden actively embeds the building into the ground, cushioning and embracing the centre in a hill, showing the necessity of a supportive environment that is so central to Maggie’s philosophy

The Gartnavel centre, sitting on a hill overlooking the city, is next to Scotland’s leading oncology facility which serves 2.8 million people. The single-level building is comprised of a series of interlocking rooms, creating a circle around a courtyard. The building, haphazard-looking at first, is designed to maximise flow and to avoid corridors.

The gardens were designed by Lily Jencks, Maggie Keswick Jencks’s daughter. She said: “Designing the centre has provided a strong connection to my mother and my hope is to have created a unique and joyful design in her memory. The garden actively embeds the building into the ground, cushioning and embracing the centre in a hill, showing the necessity of a supportive environment that is so central to Maggie’s philosophy.” 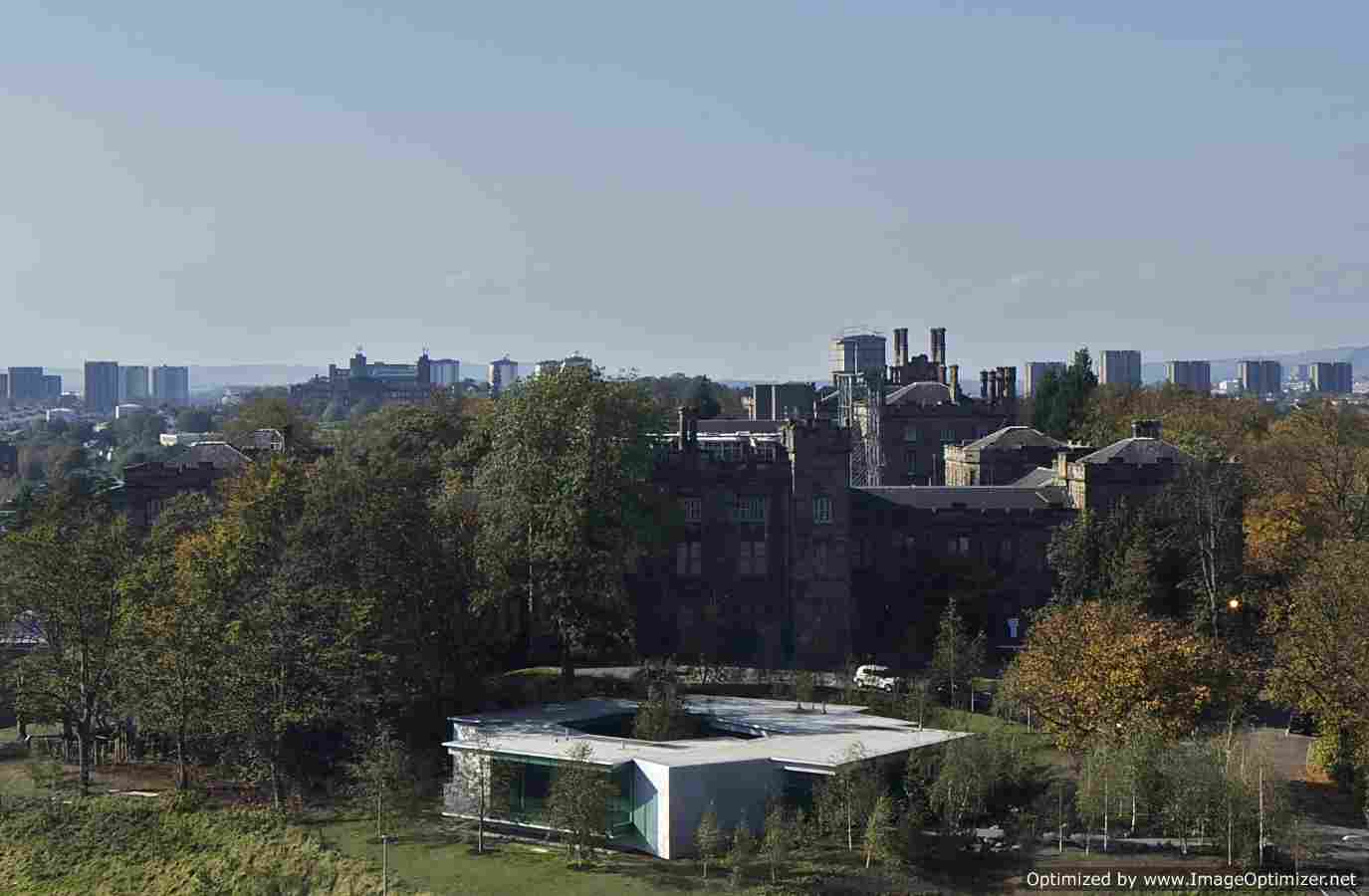