WASTE management in the NHS is big business. For many NHS organisations, waste is classified into just two streams: municipal and infectious. In fact, of the 271,811 tonnes of bagged waste in 2009-10, just 1% was classified as 'offensive', 60% was recorded as municipal, and 39% as infectious. Staff often err on the side of caution, disposing of offensive and/or municipal waste as infectious, and thereby raising costs for the trusts.

According to a study conducted by the Royal College of Nursing (RCN)1, the management of bagged waste cost the health service more than £65m in 2009-10. However, the organisation argues, just a 1% reduction in bagged infectious waste could save the NHS as much as £442,000 a year in hazardous (infectious) waste processing costs; while reclassifying it as offensive waste would make a net saving of around £272,000. A 20% reduction would save more than £8.8m a year with a net saving of £5.5m if it were reclassified in this way.

"Any misclassification of offensive waste can result in an unnecessary dependence on high temperature incineration or alternative treatments resulting in additional costs associated with the relatively high charges for treating hazardous wastes," the RCN report says. "The compaction of offensive waste when segregated introduces potential significant cost and transport-related carbon savings associated with the reduced transport burden from the site of production."

According to the report, the cost of disposing of infectious waste in 2009-10 averaged £437 per tonne for infectious waste, compared to £121 for municipal waste and £349 for offensive waste. One trust in the North West of England saved £88,000 through the reclassification of its waste and efficiencies gained through the compaction of offensive waste. The trust found a supplier that could provide a mobile compaction unit with a fully sealed, leakproof charge box suitable for offensive wastes. The compactor - a Husmann SPB AN portable compactor from Environmental Waste Controls (EWC) - also has an adapted compactor ram system which helps to eliminate the need for regular cleaning of the charge box. It works by using low hydraulic pressure so that the bags of offensive waste are less likely to rupture and liquids are not mobilised during compaction, although a pro-active maintenance regime is still necessary to maintain the integrity of the seals.

The trust's average net weight per consignment is around 3.5 tonnes and the unit is exchanged twice per week - significantly less than was previously needed when the waste was collected in large bins.

The unnamed case is highlighted in the newly-updated NHS guidance, Health Technical Manual 07-01: Safe Management of Healthcare Waste2, which was published last month. The manual includes updated information on a range of areas, including further guidance on the classification of waste, particularly in the infectious and offensive waste streams and recommendations regarding training staff on waste management. 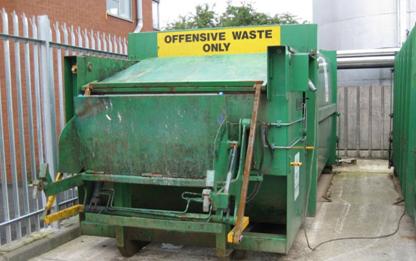 Another trust which is making great strides in improving its processes is East Kent Hospitals University NHS Foundation Trust. Earlier this year it installed a hospital waste weighing system from Avery Weigh-Tronix at each of its three hospital waste collection sites. The system not only helps the trust monitor how much waste is being thrown into its clinical waste system, but also enables it to monitor what it is being charged. It is all part of a waste auditing package which, says the trust's associate director of facilities, Frank McCarvill, is helping to drive better segregation. "You have to put a lot of effort into correct segregation," McCarvill says, explaining that staff not only receive training in waste handling, but the trust has also developed its own waste training package.

We have come a long way in terms of waste management. We have a waste manager and we have built three new waste compounds and have a target this year of £40,000 in cash-releasing savings

"We have come a long way in terms of waste management. We have a waste manager and we have built three new waste compounds and have a target this year of £40,000 in cash-releasing savings."

The trust outsources its waste collection to SITA as part of a contract negotiated by a consortium of trusts in Kent. As part of the contract, SITA is responsible for disposing of the different waste streams for the consortium. However, if waste is not segregated properly, trusts may be liable for a minimum £270 penalty, which adds further to waste handling costs.

There is so much we can do that will bring a real cost benefit. If every trust did it, there would be phenomenal savings

"In the past, we were having to pay a penalty almost every week," McCarvill says. "Now it is very rare."

Having already implemented a paperless office system, the trust is now looking at increasing what it can recycle, including food, and it is exploring using land share to grow fruit and vegetables. "It is wrong to put a lot of waste into landfill - it's not only the cost of the waste, but also the human cost," McCarvill comments. "There is so much we can do that will bring a real cost benefit. If every trust did it, there would be phenomenal savings."