Report reveals more than £200m worth of projects announced in March

The medical and healthcare construction sector has seen the biggest increase in activity for two years, with more than £200m worth of projects announced in March.

This marks the biggest increase of any construction sector, according to the latest edition of the Economic & Construction Market Review from industry analysts, Barbour ABI.

Overall, the value of new construction contracts across all sectors in March reached £5.3billion, a monthly increase of 8.7%.

The continuous decline of infrastructure construction contracts, and in particular big ticket infrastructure projects, will not help to repair the sliding confidence across the industry

But the overall positivity cannot be shared across all sectors of construction, as infrastructure figures reached their lowest point since Barbour ABI began tracking the series.

Residential housing continues to dominate the construction sector and across March had a total contract value of £2.4billion, its highest figure for seven months.

Outside of infrastructure, every other sector saw an increase in March for contract values compared with February, with the biggest increase – 35.5% – in medical and health construction.

Comparisons with March 2017 show a 137.3% increase in medical and healthcare contracts.

For the three months to March 2018 the total value of contracts awarded was £474m, representing a 24.5% increase on the previous quarter and 39.2% ahead of the comparable quarter in 2017.

Commenting on the figures, Michael Dall, lead economist at Barbour ABI, said: “The continuous decline of infrastructure construction contracts, and in particular big ticket infrastructure projects, will not help to repair the sliding confidence across the industry, which is masking better growth across the other sectors of the industry, in particular the encouraging figures coming from medical and health construction and the strong growth from residential construction.” 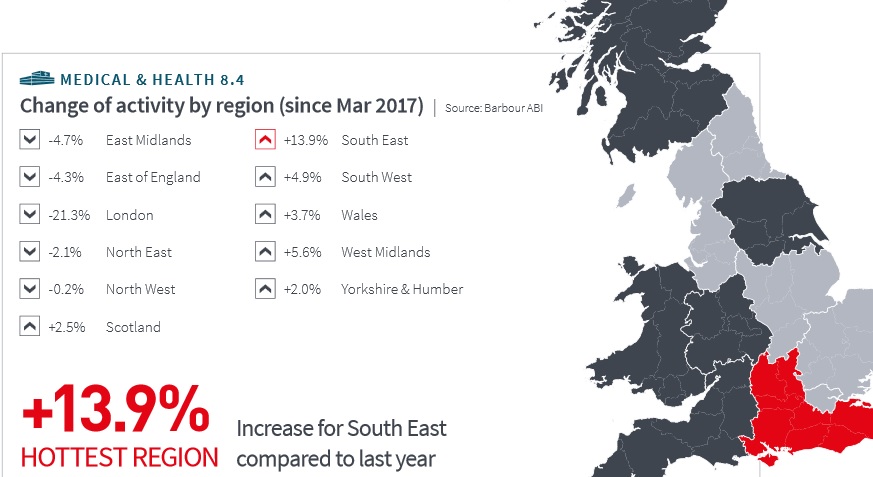 The largest region for contract awards in medical and health in March was the South East with 30.6%, which compares to a 16.7% share.

The largest contract award in the region in March was the £34.6m refurbishment of the cancer centre at Milton Keynes University Hospital.

The contract was awarded to Galliford Try Construction Central and will involve civil engineering, external works as well as the relocation of the pharmacy department and acute assessment unit.

The second-largest region for contract awards was the West Midlands with a 15.7% share, an increase of 5.6% on March 2017.

A key contract in the region was the redevelopment of Norton Court at the Birmingham Women’s Hospital.

The project will include providing staff accommodation over seven storeys as well as mechanical and electrical upgrades and was awarded to Interserve Construction.

Contract awards in March were dominated by public hospitals, with an 81% share, an increase of 49% on March 2017.

The only other sectors with any significant share were surgeries, health & medical centres, with 10% compared to 34% in March 2017; and and hospices, nursing & psychiatric homes, with a 7% share, a 6% decrease compared with March.