Lightwell is transformed into chapel garden

New facility for staff, visitors and patients at Norfolk and Norwich University Hospital

An uninspiring lightwell at Norfolk and Norwich University Hospital has been transformed into a chapel garden.

Landscaping company, Plan to Garden, designed and built the facility despite major challenges posed by its location at the centre of the hospital site. This saw materials and equipment, including a digger, being transported through the main corridors; and exhaust fumes being pumped over the roof to prevent them entering operating theares on the second floor.

The work was carried out in conjunction with the hospttal’s arts team and representatives from Serco, the hospital’s service provider, as well as health and safety, fire safety and infection control departments.

The resulting garden has many features including a water rill, which gives the impression of water continually encircling the garden in a figure of eight – the sign of infinity. At one end is a crescent-shaped vertical water feature symbolising the fountain of life and giving an extra dimension to the soothing and calming effect the flow of water produces. The water is supplied via a 950-litre underground tank.

Curved seasoned oak-topped seating encircles the central wish tree and there are two other seating pods that use both the seasoned oak and vertical natural weathered oak sleepers. 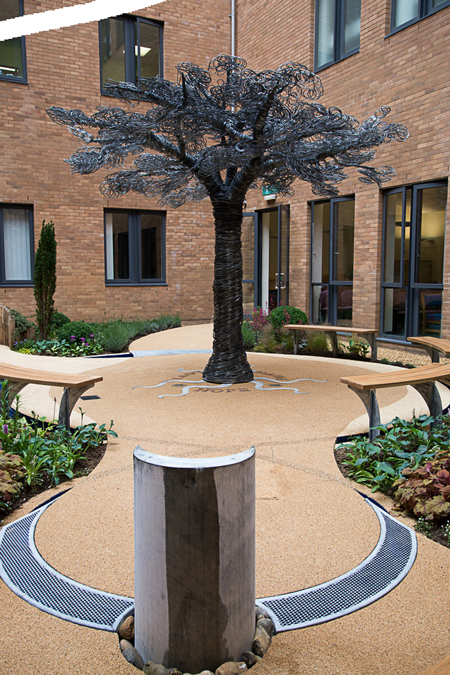 The new garden provides a peaceful place for staff, patients and visitors

The wish tree and all other metal used either in the seating, rill and manhole cover all are made from etched galvanised steel, which is soft grey in colour and harmonises with the oak and honey-coloured stone dressing that covers the walkways.

The site is in the shade for the majority of the day, limiting what plants could be used, but the main structure uses 12 clipped box balls of varying sizes. Other varying green shade-loving plants have been planted in drifts interspersed with shades of purple and white-flowered perennials, giving layers of form and texture to the soft landscaping.

The design of the garden also encompasses the ‘golden ratio’ in that the space is physically divided by thirds with the height of features taken into account. These areas have been given subtle symbolism to reflect peace, hope and love.

Set in what was once a large light well it now forms a pod of colour and smells of flowers, grasses and shrubs accompanied by the soothing sounds of water.

The funding for the garden was facilitated by Kim and Nick Brighouse. Kim said: “While volunteering at the hospital I soon discovered how much a chapel garden would be valued and appreciated. The idea became a reality when a charitable fund was transferred back to Norfolk. I wanted to create a sanctuary out in the fresh air where people could take time out to relax, reflect and find some calm.”