A scathing report has heavily criticised the Department of Health (DH), Monitor, and Peterborough and Stamford Hospitals NHS Foundation Trust after the decision to build a new PFI hospital left the organisation with a crippling debt it has little chance of being able to pay.

According to a report published today by the National Audit Office (NAO), neither the trust nor DH chiefs addressed concerns raised by foundation trust regulator, Monitor, about the affordability of the new Peterborough City Hospital, instead proceeding with a project the trust ‘could not afford’. And Monitor itself rated the trust as having a very low financial risk without taking into consideration the huge bill the PFI development would generate, the findings show.

The problem relates to a PFI deal that was signed off in June 2007, with the new hospital opening in December 2010. Monitor questioned the move with the trust board and the DH before the business case was approved, but it was later rubber stamped despite the concerns. The NAO report accuses the department of ‘not being sceptical enough’ about its affordability. This meant the trust was faced with ‘a very large, recurrent deficit’ once the new facility opened.

This week’s report found that, although the PFI payments and other estates costs would be a challenge for the trust under normal circumstances, past failures in financial management had compounded the issue.

The level of health services provided by the trust is also greater than envisaged in the PFI business case, which assumed a 14% drop in outpatient activity when it actually increased by 21%. In addition, the primary care trust, NHS Peterborough, has also reported financial difficulties and has used national and local performance indicators to withhold payments for activity undertaken by the hospital. And the trust has had five different chief executives since the preferred bidder for the PFI project was identified.

Lack of cost control, a large increase in costs resulting from the new building and underfunded healthcare activity have all contributed significantly to the trust’s financial deficit

Commenting on the report, Amyas Morse, head of the NAO, said: “The trust board’s poor financial management and procurement of an unaffordable PFI scheme have left it in a critical financial position.

“The board developed and enthusiastically supported an unrealistic business case built on over-optimistic financial projections. The regulatory and approval processes did not work in this case and did not ensure affordability.

“Irrespective of how far the PFI scheme contributed to the current deficit, the latter is now too great for the trust to balance its finances by managing its own resources. The trust, the department, commissioners and Monitor need to work together and take urgent action to help the trust get back on its feet."

Under the PFI deal, the total cost of the scheme, including construction and financing, was £411m. The trust paid back £41.6m in fees during 2011/12 alone, this included £20.5m worth of transitional support from the strategic health authority, NHS East of England. 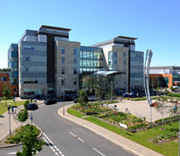 The NAO was asked to investigate the problem by the Committee of Public Accounts. Its key findings were:

The report concludes that ‘lack of cost control, a large increase in costs resulting from the new building and underfunded healthcare activity have all contributed significantly to the trust’s financial deficit’.

It adds: “The trust board developed and enthusiastically supported an unrealistic business case for the new hospital that incorporated overly optimistic financial projections. The trust lacked the capacity and capability to deliver the financial performance improvements and cost control required to maintain financial sustainability. It therefore failed in its responsibility to secure value for money from its use of resources, even though the new hospital was delivered to time and budget.

“In addition, the regulatory structure and approval processes put in place to evaluate major capital projects and regulate their implementation did not work as intended and did not ensure affordability. The trust board’s failure to respond fully to Monitor’s early concerns about the affordability of the scheme was not addressed by the department, and the trust’s deteriorating financial position was not responded to in a timely way by Monitor.”

It has now made a number of recommendations for improvements. They include where an oversight body has raised concerns about a business case, the Department of Health should not give approval until they have been addressed; and when assessing the affordability of major capital project, the Department of Health and trust boards should place less reliance on benchmarks and test more rigorously the realism of projected cash flows.

Commenting on this specific case, the report calls for the DH and local commissioning bodies to ‘work together with the trust to address its serious financial difficulties and return the trust to financial stability without undermining patient care’.

The trust, the department, commissioners and Monitor need to work together and take urgent action to help the trust get back on its feet

There are also calls for Monitor to strengthen its oversight of the foundation trust sector.

At the time, the then Health Secretary, Andrew Lansley, said: “The NHS is delivering great results for patients, but we know that a small number of NHS trusts with PFI arrangements have historic problems relating to these arrangements that make it very difficult for them to manage financially.

“We need to be certain that those NHS trusts that face historic financial problems are not taking their eye off the most important issue of all – maintaining and improving their frontline patient care.”

And in response to the NAO report, Monitor chief executive, Dr David Bennett, told BBH today: “Monitor is working with the trust, the Department of Health, and other local NHS organisations to deliver a sustainable financial solution for Peterborough and Stamford Hospitals NHS Foundation Trust which safeguards the delivery of quality services for patients.

“Monitor queried the affordability of the PFI scheme from the start, and the department only approved it on condition our concerns were addressed by the trust. The trust went ahead with the PFI anyway.

“Once the financial situation at Peterborough became clear, Monitor took regulatory action and we continue to work closely with the trust, along with commissioners and the Department of Health, to turn around its financial performance. In particular, we expect the trust to reduce costs and increase activity while maintaining quality services for local patients.”

He added: “Monitor commissioned an independent review to learn lessons from this experience and is implementing the recommendations to strengthen its oversight of long-term investments by foundation trusts."

Quizzed about its decision to withold funding from the hospital, John Leslie, director of finance for NHS Cambridgeshire and NHS Peterborough PCT cluster, said: "We have been working with the trust to ensure that it continues to provide good quality healthcare while managing its financial difficulties. We recognise it has an ambitious cost improvement programme and are supporting it as commissioners, where appropriate. But we also need to ensure that it is meeting targets for patients in key areas such as stroke and A&E attendance."

BBH also spoke to Dr Peter Reading, interim chief executive at Peterborough and Stamford Hospitals NHS Foundation trust, who said: "The trust has been heavily involved in providing information to the National Audit Office for the production of its report. The report discusses the roles of all organisations involved in the agreement to build Peterborough City Hospital under a private finance initiative. It also identifies shortcomings in the way the trust handled its finances between 2007 and 2011.

“The board acknowledges these shortcomings and over the past year has put in new structures and systems to improve our financial forecasting. We are also on track to deliver £13.2m of cost savings in 2012-13.

“Our patients can be assured that we are working to our turnaround plan which focuses on delivering savings and efficiencies while maintaining the consistently high standards of quality care.”

Commenting specifically on the PFI scheme, he added: “It has been acknowledged that our PFI payments are unaffordable. We continue to work with the Department of Health and Monitor to demonstrate that we are a foundation trust that meets its quality and performance targets, often under challenging demand from an increased level of patients using our services. This has enabled us to receive financial support from the Department of Health in early 2012 and we are anticipating further support in early 2013.

“As the majority of the board members who approved the project to build our hospital are no longer in post, I cannot speak on their behalf about the decisions taken at the time, but what I will say is that Peterborough City Hospital is one of the finest facilities in the NHS and is popular among its patients. Without this hospital, the city would be struggling with three separate sites in Peterborough, which collectively required hundreds of millions of pounds in renovation costs to bring them up to a satisfactory standard.”