The announcement last autumn that the Government had set aside extra funding for the ‘largest hospital building programme in a generation’ could be the saviour for the healthcare construction sector after a slow year, experts have hinted.

Construction market analysts at both Glenigan and Barbour ABI have recently published reports on the state of the UK building industry.

And, while they show the market across all sectors slowed last year, with healthcare particularly badly affected; they are predicting a shift in fortunes in the coming months.

The Glenigan Construction Review, which reflects activity from February 2019 to the end of January 2020, states that the value of projects starting on site across all sectors averaged £2.6billion a month during the three months leading up to January this year – a 33% decline on the previous year.

In the healthcare construction sector specifically, the total value of starts during the three-month period was £725m; 67% lower than a year ago.

However, there is evidence the coming months may see a revival in the market, with the development pipeline improving.

The report states that the value of underlying approvals for health projects is 40% higher than a year ago.

Most of the projects are Government-led schemes, with the Department of Health second in the league table of the top 50 clients for February 2019 to January this year, just behind the Department for Transport.

In total, it provided 292 projects totalling £1.3billion during that period.

but the department took over pole position for January this year, with 31 projects totalling £191m.

The report states: “The latest index reveals a subdued start to the New Year for construction.

“The value of underlying project starts across all sectors dropped 11% during the three months to January.

“Political uncertainty and delay ahead of the general election contributed to the fall.

“The more-certain political environment should now enable postponed public-sector projects to proceed to site and will hopefully lift investor confidence over the coming months.”

This is certainly true of healthcare, where the Government has given permission for both the Midland Metropolitan and the Royal Liverpool hospital developments, shelved after the collapse of contractor, Carillion, to be restarted.

And this cautious-yet-optimistic outlook is supported by Barbour ABI’s latest research, outlined in its monthly Construction Market Review – February edition.

This shows the value of medical and health construction contract awards in January was £95m, based on a three-month rolling average.

In the three months to January 2020, the total value of medical and health contract awards was £262m; an increase of 6% on the previous quarter, but 40% lower than the comparable quarter ending in January 2019.

“The sector remains subdued with contract awards having remained below the £100m threshold since June 2019,” it states.

“Given the low values of awards the likelihood of significant output gain into the medium-term remains remote.” 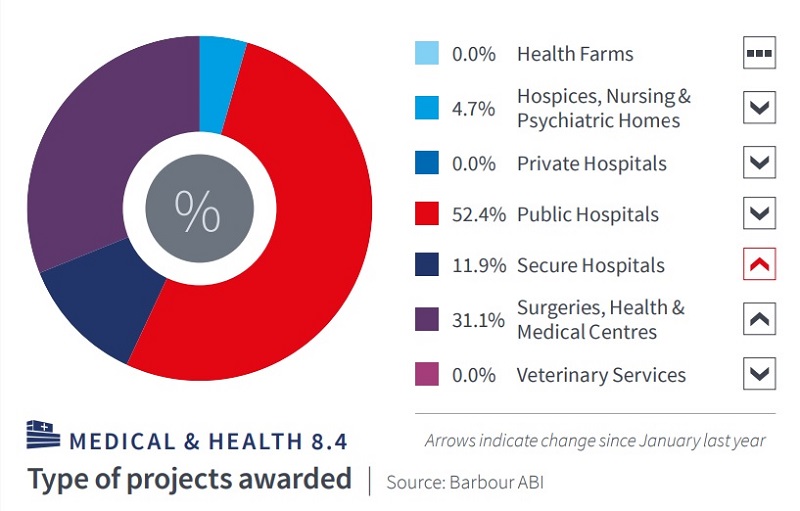 Most of the spend was on public hospitals, according to Barbour ABI figures

In January London held the largest share of contract awards at 45.7%; a 30% increase on a year ago.

This is mostly due to the awarding of the £74m Springfield University Hospital Modernisation Phase 3 contract to Sir Robert McAlpine.

Analysis by sector indicates that public hospitals were the leading sector in January with 52.4% of awards, a decrease of 5.2% when compared with January 2019.

Surgeries, health and medical services were the second-largest sector that month; accruing 31.1% of contract awards - 9% higher than a year ago.

Architects with the most awards in the health sector were Stride Treglown (£309m); and CF Moller Denmark with £118m worth of projects. 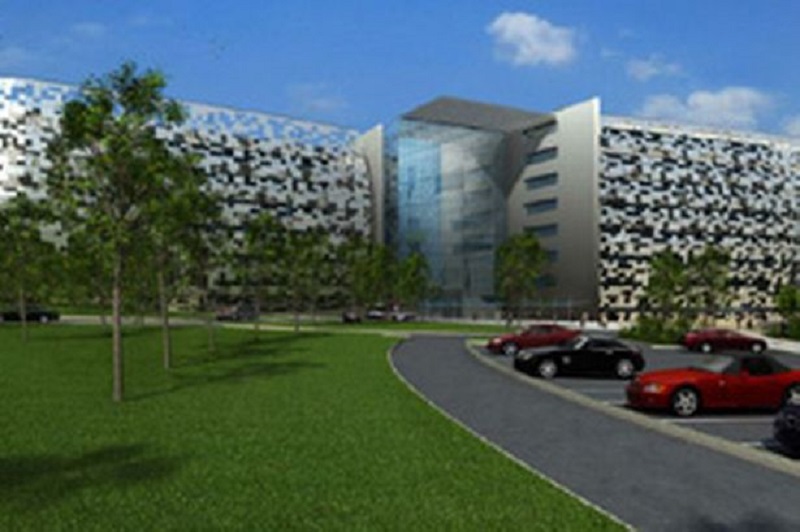 The Government has recently given the go-ahead for work to begin again on the Midland Metropolitan Hospital project, which ground to a halt following the collapse of contractor, Carillion