The new Alder Hey Children’s Health Park is more than just a hospital. The £250m scheme sets a new benchmark for the delivery of modern healthcare. Here, we look more closely at one of the UK’s most-ambitious medical construction projects

The forward-thinking client project team at Alder Hey Children’s NHS Foundation Trust wanted to create a new paediatric medical facility that was like no other anywhere in the world.

From the very beginning this was going to be a hospital like no other. The trust did not want just another children’s hospital. They wanted an entirely new concept of a healing environment for sick children

And, having recently opened, the £250m development is already proving a hit with patients, staff and visitors, providing top-quality healthcare services in an environment designed to enhance wellbeing and aid recovery.

Ged Couser of BDP Architects, who was the project director, said: “From the very beginning this was going to be a hospital like no other. The trust did not want just another children’s hospital. They wanted an entirely new concept of a healing environment for sick children.”

And so the Children’s Health Park was born. 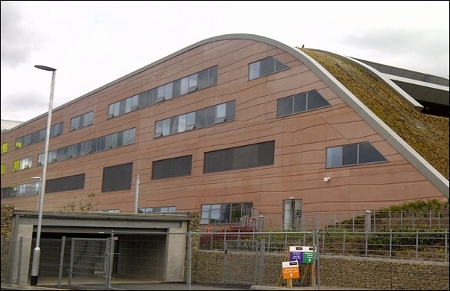 Designed around colour and transparency, the building has been orientated to make the most out of its heavily-landscaped setting.

“We were so lucky that, unlike the usual constraints we are faced with when designing most of our new buildings, we had an untouched greenfield site on which to build,” said Couser.

“Our London, Manchester and Sheffield offices were involved, led initially by the design director, Benedict Zucchi, so we were able to do something truly extraordinary.”

Covering a floor area of more than 60,000sq m, the new hospital has been sited in such a way that all rooms look out onto the surrounding park, helping to blur the separation between the outside and inside.

“This project has been all about enhancing the patient experience for staff and patients,” said Couser.

“We have used a lot of new systems and approaches, and have commissioned bespoke products, which could now be used to enhance medical facilities worldwide.”

Few hospital developments are lucky enough to have such a beautiful site available, and therefore the design of Alder Hey is unlikely to be widely replicated, particularly in the UK. However, some of the unique building products and systems used during construction have caused excitement within the industry. 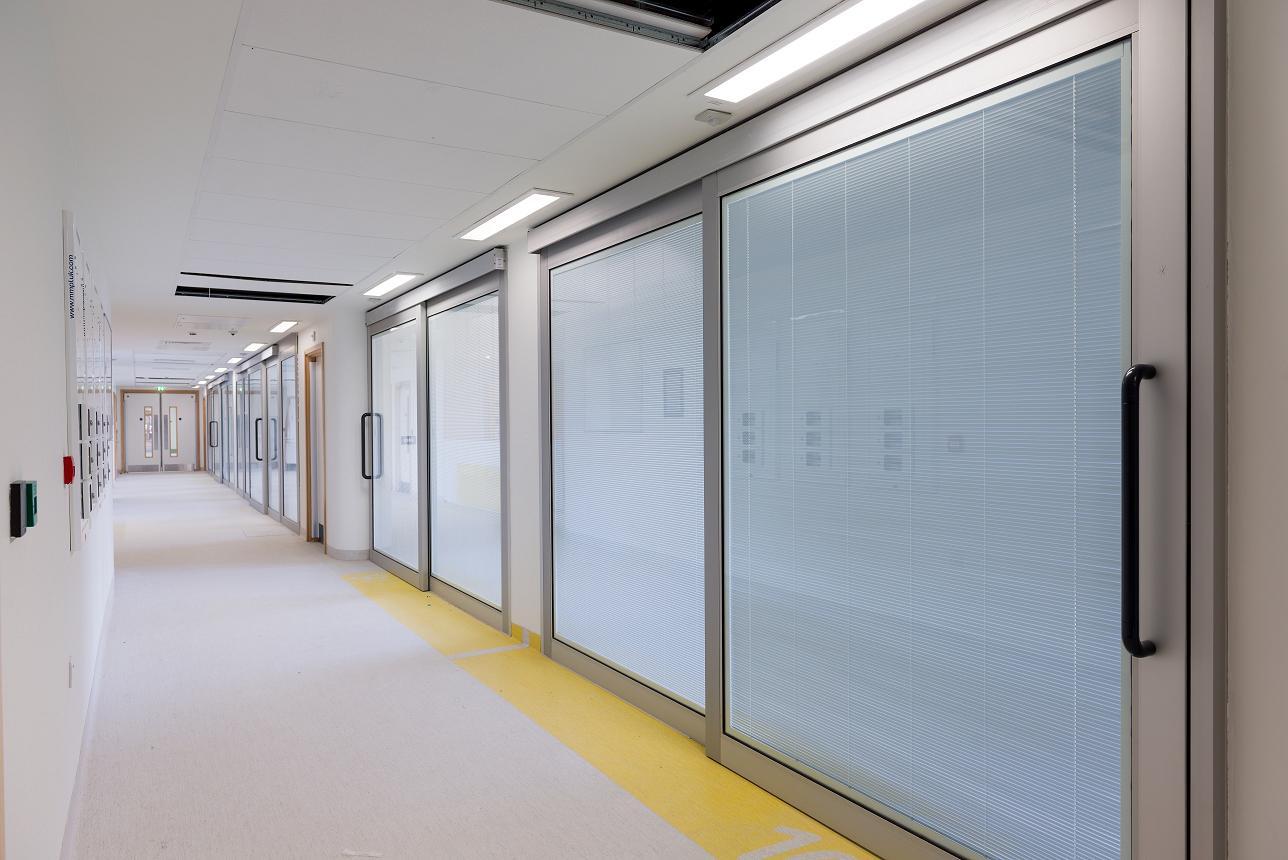 Axis Flo-Motion Doors have integrated blinds for infection control and easy maintenance, and a patented new sliding mechanism includes an ingenious damper, which slows the movement so they can be controlled by young people.

The building envelope also provides a new approach for the sector.

Designed by WSP Parsons Brinckerhoff, and installed as part of a civils and structural and buildings services contract led by Laing O’Rourke, around 1,265 precast concrete sandwich panels were used on the perimeter to distribute the loads to the foundations, removing the need for conventional columns.

These panels were manufactured off-site, reducing the need for external scaffolding, waste, congestion, dust and labour. Once installed, they also allowed for early access for the mechanical and electrical fitters. 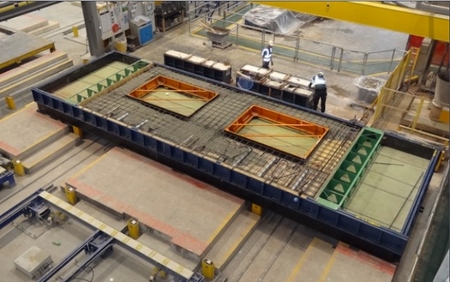 Malcolm Davidson, WSP Parsons Brinckerhoff director, said: “From the outset we explored the optimum technique for the structural frame, based on both cost and efficiency and other influencing factors such as sustainability and design adaptability.

“A precast composite flat slab supported by precast columns on a typical 8.1m x 8.1m grid proved to be the optimum solution. The perimeter façade was integrated with precast concrete load-bearing sandwich panels.

Everyone really loves the new building and we feel we have produced something which will set a new benchmark for the delivery of paediatric care, both in the UK and overseas

“This system may have been used in isolation previously, but for this to be the main component of such a significant project is unique.”

Using newly-designed concrete columns, precast composite floor slabs, special reinforced concrete shear walls, movement joints, and the new sandwich panels, meant a reduction in the build time and a host of other benefits including low maintenance, a reduction in traditional labour, and improvements in thermal mass and energy efficiency.

Couser said: “The first patients are now in the new hospital, and the feedback we have had is excellent. Everyone really loves the new building and we feel we have produced something which will set a new benchmark for the delivery of paediatric care, both in the UK and overseas.”

As well as a ground-breaking building and landscaping design, the new hospital is also leading the way in digital innovation.

Alder Hey is a medical facility boasting some of the most high-tech health systems in the world; and the design team wanted to replicate this use of innovative solutions to enhance the patient experience.

This is being delivered through a bespoke patient entertainment system including its own family of animated characters, The Hardleeys of Alder Hey.

The Hardleeys – an anagram of Alder Hey – were created by Jungle Creative, formerly NTL Digital Healthcare, as part of an ongoing contract funded by Alder Hey Children’s Charity.

Jungle Creative managing director, Graham Ebbs, explained: “Rather than just putting TVs and paintings on the walls, the project team wanted to see how far they could go digitally and how they could make things more interactive.”

But, rather than create a standalone piece of technological wizardry, or develop expensive interactive content from existing characters, Jungle Creative had other ideas. Ebbs explains: “The charity is very forward-thinking and we agreed we didn’t want to waste the opportunity and just put technology in for technology’s sake. 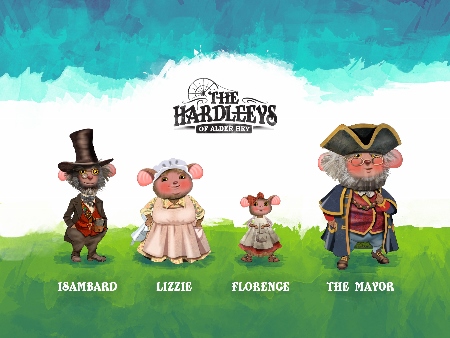 “We wanted to create something that had heart and soul, something the children could relate to and build a relationship with, and that would entertain, distract and educate.”

Rather than just putting TVs and paintings on the walls, the project team wanted to see how far they could go digitally and how they could make things more interactive

And so the Hardleeys – a family of furry creatures who have just awoken after a 100-year sleep to find that the new hospital has been built on top of their network of burrows - were born.

The charity now has a series of DVDs of the Hardleeys it can sell to raise money and, inside the new hospital and in the outpatient department courtyard, digital technology brings the characters to life.

The corridor approach to the radiology department has the Hardleeys’ underground burrow projected onto the walls and in each of the sub waiting rooms there are two TV screens with an animation introducing all of the characters.

Moving into the ultrasound department, children can choose to watch one of 10 films presented by budding inventor, Isambard - one of the Hardleeys. These are projected via iPad onto the ceiling, helping to keep children calm during their procedures. A button on the iPad also connects to YouTube so youngsters can choose their own programmes to watch.

In addition, interactive tablet-driven games are used on the cardiology and oncology ward play areas to encourage the children to socialise and move around - a crucial part of their recovery.

And the story of the Hardleeys continues in the outpatient waiting room garden, where actress, Sue Johnston, narrates a 24-minute film, revealing the family history and plans for the future. There are also eight periscopes linked to iPads, which enable children to watch the characters as they go about their daily activities.

Connected to microphones, the children can speak to the family. For example, if they say ‘hello’, the characters will wave; but if they shout, they will hide and shiver. 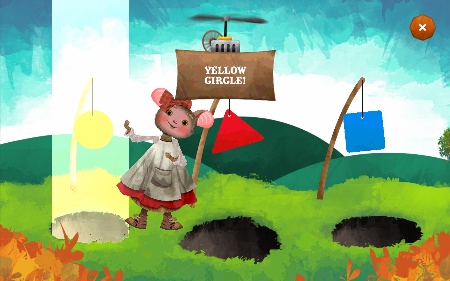 The hospital is now introducing the characters on staff name badges and its catering team is looking into including them on menus.

“In radiology, we’ve had great feedback as the digital films help to distract and relax patients and their parents, leaving the medical staff to do their jobs,” said Jungle Creative creative director, Allan Johnston.

“It creates such a calm environment.

“In addition, the play therapists use them to encourage children to mobilise and to interact with one another.”

He added: “Children now are so technologically literate that you need to think outside the box.

“You don’t want children just sitting in bed playing on their own on their iPads, and you can’t compete with the multi-million-pound games and apps that are out there.

We have used a lot of new systems and approaches, and have commissioned bespoke products, which could now be used to enhance medical facilities worldwide

“The Hardleeys have enabled us to offer great solutions to both of these problems.”

Although the creation and installation of the patient entertainment systems is complete, there is more ahead. Johnston said: “To date we have introduced the characters to the hospital, but there’s so much more we are planning to do.”

Ebbs adds: “In phase two we want to introduce activities, both digital and linear, that will inform patients of the various procedures they can expect to undergo.

“Anxiety is often due to a fear of the unknown and if procedures, and who people are, can be explained before they get into hospital, this could massively improve the experience for young patients.”