University robots to improve the care of older people, patients and autistic children

A team of students have spent the summer teaching Robbie, a toddler-sized robot, to recognise 90 common objects as well as human actions and emotions.

Thanks to the availability of large-scale annotated images, Robbie can now learn from these images and use his eyes to recognise items and actions, guess the gender, and estimate the age of the person in front of him and identify if they’re sad, surprised, happy, angry, or disgusted.

He speaks aloud and will say phrases such as ‘you are eating a banana’ and ‘you are a male, aged 37 and you are happy today’.

It’s hoped Robbie and robots like him will be able to become companions to the young and old and monitor their daily activities, anything from how many times and when they have a drink to what they eat and any activities they complete.

Ardhendu Behera, a senior lecturer in computer science who is leading the project, said: “There is lots of research involving robots and they are already used widely in industrial applications such as manufacturing, service sectors and in health procedures such as keyhole surgery. 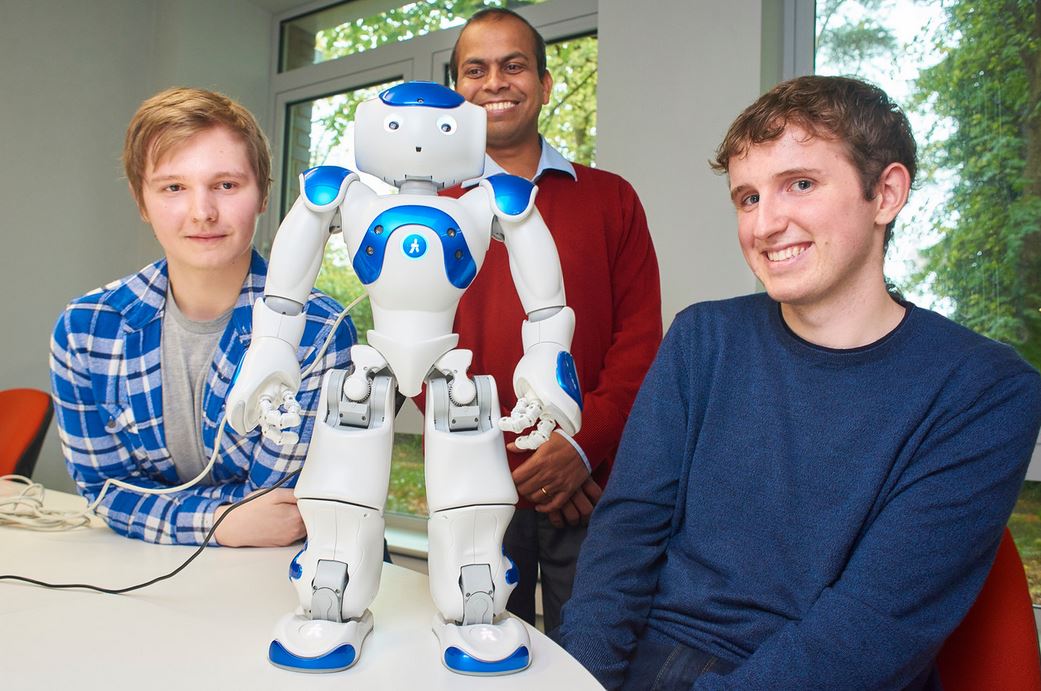 “However they are not yet used in the social care sector where we see huge potential for development and growth. Robots like Robbie could be used in so many situations and settings to monitor vulnerable people.

“Initially we see Robbie being most useful in residential care homes where he can be a companion to residents and can keep an eye on them, watching and recording what they eat, drink, if they take their medication, their emotions and more.

“Similarly we think Robbie would be very helpful in the diagnosis of learning disabilities such as autism. It’s difficult to diagnose children in a short clinical session such as at a doctor’s surgery, but if a robot could report on the child’s behaviour and activity over say a 24-hour period this would massively help understand that child’s routine.

“In modern times, and with our aging society, we believe robots can play a vital role in the care of older people. They could also be used in a traditional home setting, observing an older person between visits by a carer or relative for example. The possibilities are endless.”

Behera is currently in talks with West Lancashire Borough Council and Home Instead Senior Care residential care providers about trialling Robbie in a care home setting to gain ‘real’ data.

He said: “This project stemmed from an eight-week summer project providing career development opportunities for students. It’s a framework I plan to develop and offer to students each year to drive the project forward.”