The design of adult mental health bedrooms has been put under the spotlight as mock units are created to encourage fresh thinking among healthcare architects and product suppliers.

The Better Bedroom Initiative was launched by the Design in Mental Health Network (DIMHN) and brings together the latest best practice to ensure that in the future adult mental health service users benefit from modern, homely environments that aid recovery.

The first of two concept bedrooms is currently being exhibited at the premises of Britplas in Warrington. The aim of the Better Bedroom is to spark innovation and to encourage more thought among suppliers and commissioners.

Jenny Gill, who is leading the initiative on behalf of the DIMHN, told BBH : “The environments in which mental health treatment is delivered are not always conducive to recovery. Nine times out of 10 people with mental health problems are not suffering from a physical illness which requires hospital treatment, so we are trying to create a safe environment that strikes that balance between being safe and secure, with things like anti ligature fixtures and fittings, but one that is also pleasant to be in and as such aids recovery and reduces length of stay.”

Joe Forster, chairman of the DIMHN, added: “We are not trying to establish the best, full stop; rather an idea of balance. What works for some people in particular circumstances won’t necessarily work elsewhere without a bit of tweaking or revisiting. We are providing a starting point so that people can begin from a position of strength. We are trying to encourage them to think outside the box.” 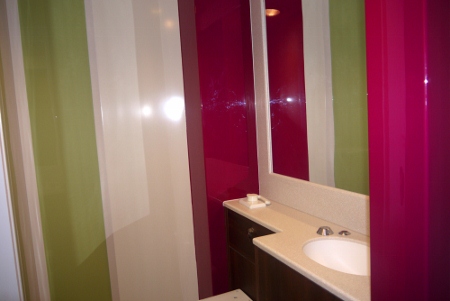 The problem, he claims, is that often standards laid out in Health Building Notes and other industry guidance means that innovation is stifled.

“There are lots of things around about minimum room size and important considerations like privacy and dignity,” he said. “These are often intended as a minimum standard, but they become the norm often to save money. For many it is easier to get a set of criteria off the shelf and then choose the products that fit. This is the simpler and often cheaper way of doing things.

“However, this over-standardisation gives you less agility and prevents smaller manufacturers and suppliers from getting a foot in the door and this stifles innovation.

We are providing a starting point so that people can begin from a position of strength. We are trying to encourage them to think outside the box

“Some design teams can get fixed on a particular idea that has worked well in one place and will replicate that elsewhere without thinking it through with their clients.

Suppliers are being challenged to come up with new designs for everything from bedroom furniture and flooring to lighting, vision panels and windows

When setting up the mock room, the team held Dragon’s Den-style pitching days to encourage industry to suggest innovations that could be incorporated into the showcase room. As a result, it includes several new and improved technologies that will help to deinstitutionalise mental health environments. These include a new vision panel for doors which incorporate ‘smart’ glass, which changes from translucent to transparent when operated. The panel is linked to a computer so that when an operator checks on a patient there is a record of the observation. Britplas has also installed its Safevent Window, which maximises natural light and ventilation while ensuring patients are kept safe and secure.

Other contributors include Taurus, which has supplied specialist fitted furniture; Altro, which has installed specialist wall and floor finishes; and danfloor, which designed the bedroom carpet. The layout, overall plan and interior décor of the room were overseen by Gilling Dod Architects.

The Better Bedroom project is not about the best bedroom. It should never be about the best as then we are saying we cannot do better and that would mean we are getting complacent

Jenny said: “Mental health bedrooms tend to be rather bland environments. I have no problem with magnolia, but if we are using neutral colours then we need to look more closely at lighting. For the Better Bedroom project we have been quite bold with our use of colour to show there is an alternative. The healing properties of light are also becoming known and we would like to see more use of these in mental health.

“The products are really important too, for example we will be working with industry on anti-ligature lighting. Currently these tend to be either flying saucers or strip lights and they are not particularly aesthetically pleasing. We are trying to encourage the market to look at lighting in mental health and to come up with an alternative which is more aesthetically pleasing.

“The Better Bedroom project is not about the best bedroom. It should never be about the best as then we are saying we cannot do better and that would mean we are getting complacent. We intend to let it evolve and to continue to create better bedrooms reflecting innovation and best practice as it moves forward.”